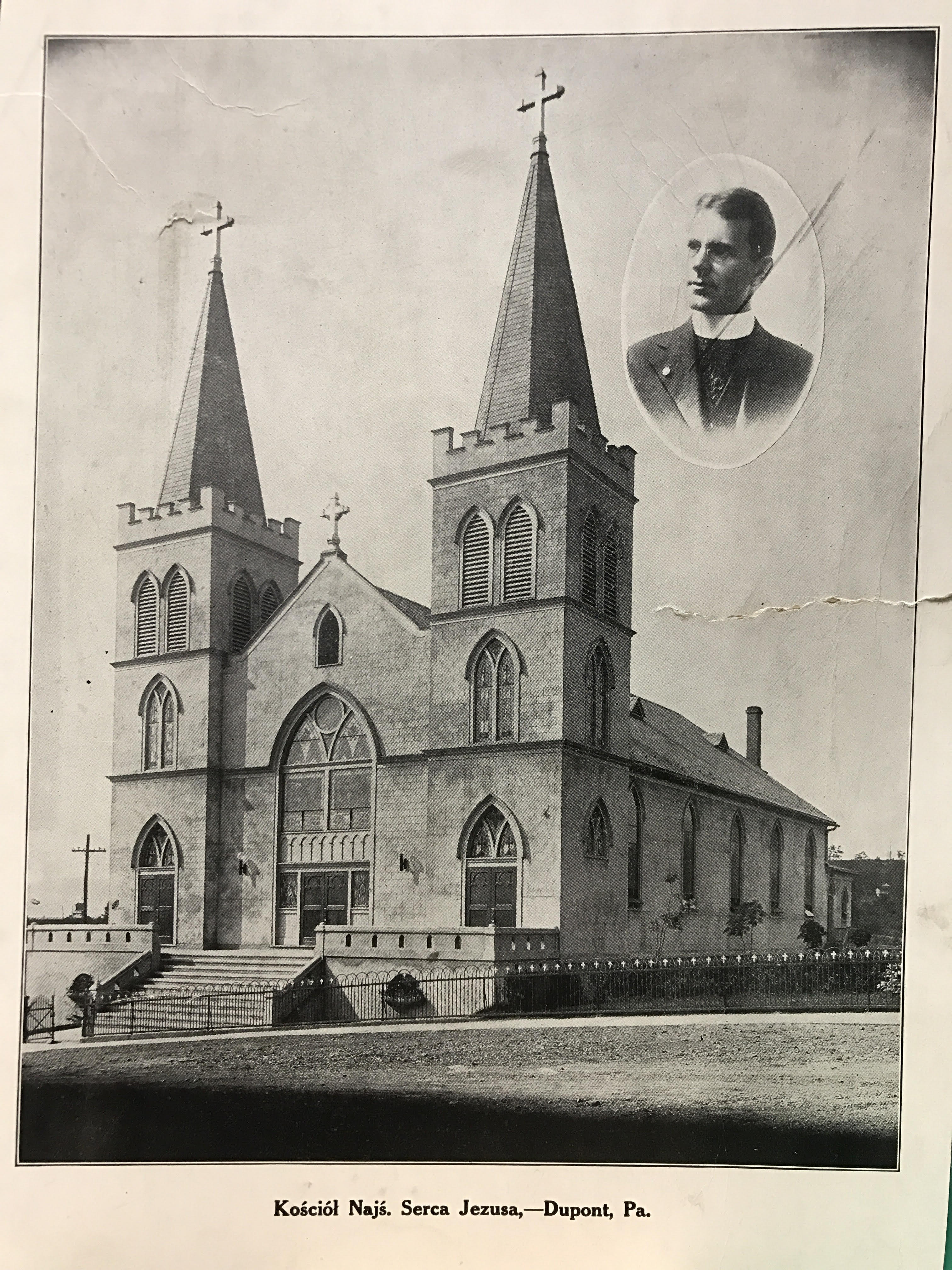 The immigrant migration to the New World was spurred by the generally poor conditions that existed in Europe at the turn of the century. As a result of these conditions, the little town of Smithville, Pennsylvania, later to be named Dupont was the recipient of a sizeable number of Poles looking for a new home, jobs, and a better way of life. The rich anthracite coal deposits of the area provided the mining jobs that were so desperatley needed. Church services were available at Our Lady of the Holy Rosary Church located a distance away in Duryea. As the Polish community grew, it became apparent that a church needed to be built. In 1901, the congregation of the Sacred Heart of Jesus Church began forming. Early in 1902, Bishop Michael Hoban gave the congregation permission to begin work on its own edifice. Good fortune prevailed as construction of the church coincided with a six month strike at the coal mines; the parishioners, along with the cooperation of the idled miners, were able to complete the project in a short period of time. The new church was constructed from wood and a new parish was born.

At Christmastime in that very same year, the late Very Rev. Msgr. Stanislaus Szpotanski celebrated the First Holy Sacrifice of the Mass at Sacred Heart of Jesus Church in Dupont.

Bishop Hoban, Ordinary of the Diocese of Scranton, assigned Father John Gratza as the first pastor. Two years later, Rev. Henry Cichocki was named pastor of the fledging church and during his tenure at the parish; regular grade school instructions began in the basement of the church.

On March 9, 1916, Rev. Francis X. Kurkowski, a newly ordained priest, was appointed pastor. That year, through the efforts of Father Kurkowski, the Bernadine Sisters of St. Francis replaced the lay teachers as instructors at the school.

Early Growth Period
Spurred by rising enrollment and the lack of proper teaching facilities, plans for a new parochial school were completed. Generous donations from parishioners resulted in completion of a complex consisting of the school, a convent housing eight nuns, and a rectory. The construction of the complex was completed in 1919, and accomodated more than 400 students.

Tragedy and Resurrection
Shortly after completion of the school building, disaster struck the parish when a fire of unknown origin completely destroyed the then wooden church. Undaunted by the setback church services were transferred to the hall at the new school; and construction of a new stucco veneer church was begun. On June 9, 1920, Bishop Hoban consecrated the completed church. On that same day, 170 parishioners were administered the Sacrament of Confirmation.

During Father Kurkowski’s pastorate (1916-1938) at Sacred Heart Parish, a number of donations provided by the parish organizations enhanced the church property. As an example, through the efforts of the Polish Women’s Alliance, a crystal chandelier was purchased.  This chandelier was refurbished in October, 2018.  Secondly, a coin collection by the school children was used to erect the statue of the Blessed Mother on the pedestal in front of the school.  Presently that statue stands in the rectory garden.  Finally, through the generosity of other contributors, a plot of land was purchased for use as a cemetery; and an additional parcel of land near the church was also purchased for use as a playground.

Polonia Hall
A building constructed on an adjacent parcel of land was used as a gymnasium and hall. The building, built by the hands of the Polish parishioners for the youth of Sacred Heart Parish, was named “Polonia Hall.” This building served as the social and cultural center for many years. It was used for basketball games, dances, roller-skating, physical education classes, public assemblies, plays and theatrical presentations. Two bowling lanes and several meeting rooms were located in the basement of this building.  The building was sold and converted into apartments.

The Recent Past
In September of 1971, Father John Kowalkiewicz succeded Father Chester Kolakowski after his death. The parish was left in excellent financial condition and the church interior was renovated in resopnse to the liturgical changes of the Second Vatican Council.  During this period, the Mother’s Guild was established. This organization was instrumental in developing many programs.  The Holy Name Society for the men of the parish was also reinvigorated.

Father Leo Kozlowski served as pastor from March 1977 to November 1984. During this time, a chapel was erected on the church cemetery grounds. Dedication of the chapel occurred in 1981. The parish remained solvent and the previously ordained programs continued successfully.

Father Daniel Olszewski assumed responsibility for the parish in January 1985. During his tenure, property upgrades were completed and additional land was purchased for cemetery use. His business acumen kept the parish financially solvent.  A marble statue of the Sacred Heart of Jesus was donated to the parish by the various parish societies and was dedicated in 1994.  It rests in the front churchyard.  Upon his death in 2017, Father Olszewski willed the chalice he received upon his priestly ordination to the parish. 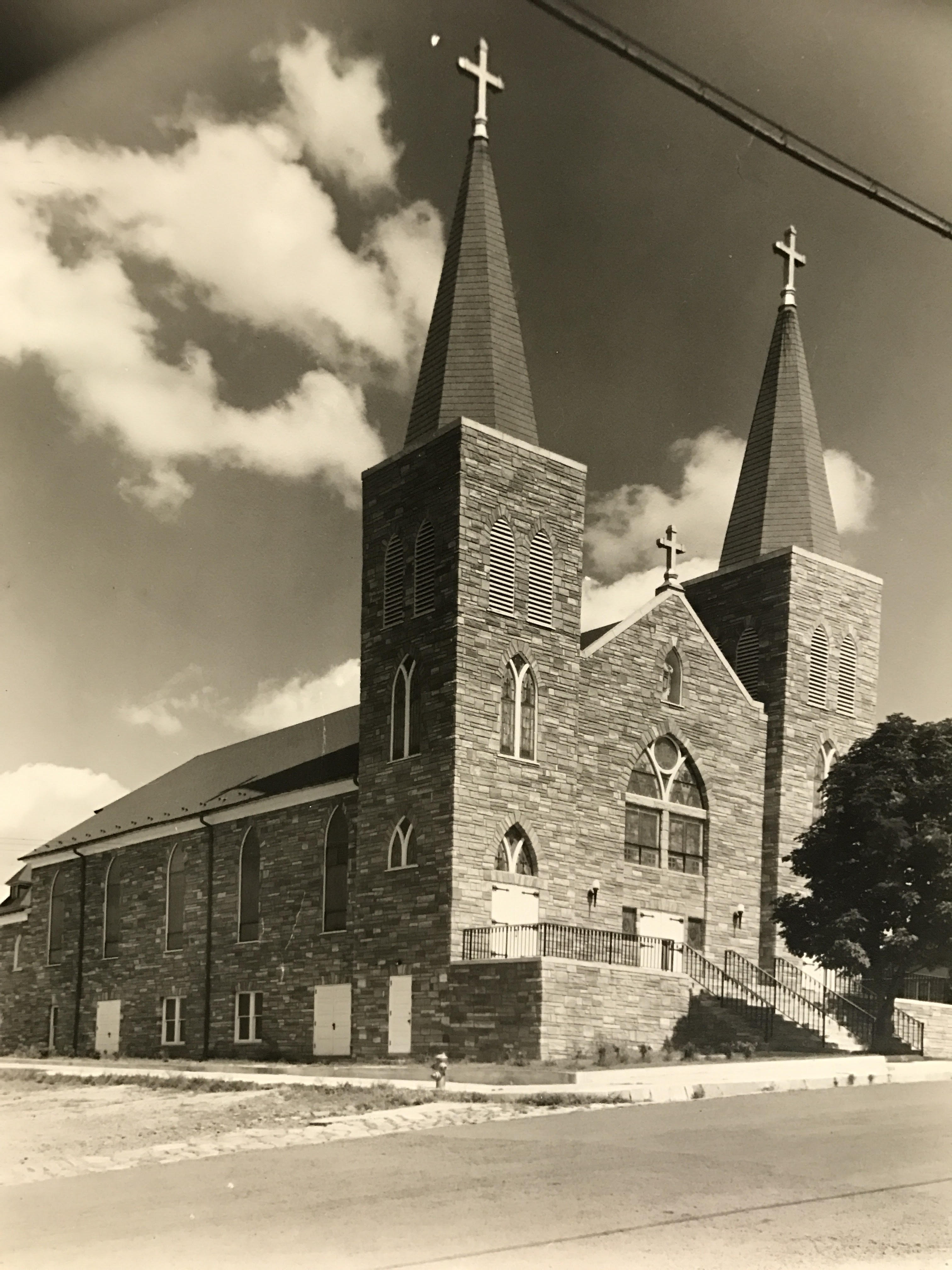 In 1999, Father Joseph Verespy arrived as the parish’s eighth pastor.  In 2002 the church steeple was struck by lightening during the annual parish picnic, requiring extensive repairs.  During Father Verespy’s tenure the parish’s school closed, in 2007.  The Bernadine Sisters of St. Francis left shortly thereafter and the convent was sold to a physician.  The old parochial school building was demolished in 2010 and the property sold.  The church steeples were found to be structurally compromised and a capital campaign was begun to fund the renovation of the church’s entire facade, which occurred in 2013.

Father Thomas Petro, J.C.L., became pastor on July 6, 2016.  In addition to his pastoral responsibilities in Dupont, he serves a a judge on the Tribunals of the Scranton Diocese, the Diocese of Arlington, VA, and the Archdiocese for the Military Services, USA.  He has bi-ritual faculties with the Eparchy of Passaic, NJ, enabling him to celebrate the sacraments according to the Byzantine rite.  In 2018, he was invested as a Knight Chaplain of the Equestrian Order of the Holy Sepulchre of Jerusalem.  Fr. Petro established the Legion of Mary in the parish shortly after his arrival.  He renovated the parish office and rectory, built in 1957, and replaced the church’s roof and restored the church’s three prominent gold steeple crosses.  An avid gardener, he planted fruit trees and a vegetable garden at the rectory as well as shade trees at the parish cemetery.  In 2017, Sacred Heart of Jesus Church marked the 70th anniversary of its famous Polish parish picnic and commemorated its 115th anniversary as a parish of the Diocese of Scranton.  In 2018, the church’s interior underwent a restoration in continuity with it’s original architectural style.  A new altar of sacrifice was dedicated by Bishop Bambera on July 14.  Matching side altars dedicated to the Blessed Virgin Mary and St. Joseph were erected, murals of the Sacred Heart and the Divine Mercy were painted and new pews and flooring were installed.  These renovations were completely funded by parishioner fundraising and donations.  Parishioners dedicated the proceeds from the August, 2018 parish picnic, called “the Picnic of the Bells,” to the restoration of the three steeple bells, which also included the installation of automated ringing equipment.  On October 28, 2018, Fr. Petro blessed the newly restored steeple bells at the beginning of the annual Cemetery Sunday devotions.  This blessing, sometimes called a “baptism of the bells,” gave names, according to custom, to each of the three bells.  The large bronze bell in the north steeple was named “Benedict,” in honor of St. Benedict, a powerful intercessor against evil.  The names “Francis” and “Thomas” were chosen for the two smaller steel bells in the south steeple, in honor of St. Francis and St. Thomas, the patrons of the pastors who, arriving to Dupont 100 years apart, respectively built and refurbished the church building.